If you’ve ever wondered how many days it takes between iOS betas to be released and the days final version have been out, you can now see it all in one place. Will Hains has painstakingly graphed all the beta and final release dates on his blog:

The design is still a work-in-progress, and it still requires me to go in and edit it every time a new beta is released, but it’s much less work than it used to be. And now, with the magic of Google’s Charts API, it’s interactive as well. The chart is 100% generated by Javascript in the browser, producing slick SVG images on-the-fly.

The charts are generated via Javascript as mentioned by Hains, which allows for an interactive experience when you rollover any specific iOS version, which reveals the ‘days in beta’ and ‘days in final’.

As for final releases, iOS 3.1 was the longest release at 285 days before another version was released by Apple: 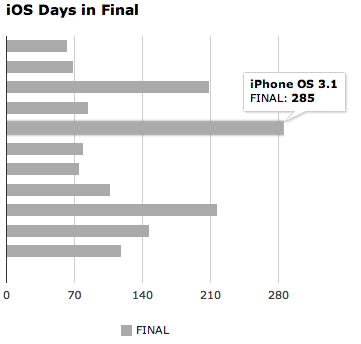 Currently iOS 6 beta 2 is available to developers. The final version of iOS 6 is set to be released this Fall.