Earlier, we told you how Microsoft Windows Phone has launched a series of attack ads targeting the iPhone 5, one of the most popular smartphones available. Now, it appears Microsoft’s search engine Bing the iPhone 5 is more popular than we probably think it is. According to a blog post by the Bing Team yesterday (via CNET), the search term ‘iPhone 5’ was the most searched news story of 2012:

Speculation and excitement around the launch of iPhone 5 built up throughout the year, making this the most searched news story on Bing in 2012.

Tech ruled the headlines in 2012 with the launch of iPhone 5, Kindle Fire HD, and Facebook’s IPO all landing in the top 10 most searched news stories. 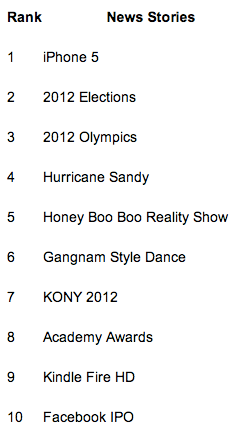 The iPhone 5 beat out searches for the ‘2012 Elections’, ‘2012 Olympics’, ‘Hurricane Sandy’ and even KONY 2012. It was also ranked first under searches for consumer electronics (the iPad tied for second place with the Galaxy S III/Samsung Galaxy). One of these days, Microsoft Windows Phone or Surface will make the top 10–one day.