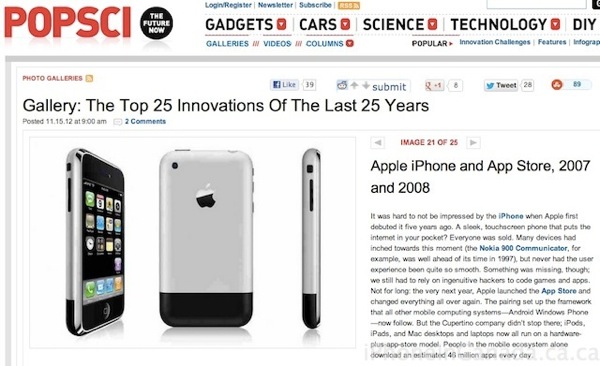 Popular Science has come out with a list of the Top 25 Innovations of the Last 25 years. A couple Apple creations made the list, in particular the original 2007 iPhone that started the smartphone revolution as we know it today, along with the 2008 App Store debut that helped keep us addicted to our iOS devices.

It was hard to not be impressed by the iPhone when Apple first debuted it five years ago. A sleek, touchscreen phone that puts the internet in your pocket? Everyone was sold. Many devices had inched towards this moment (the Nokia 900 Communicator, for example, was well ahead of its time in 1997), but never had the user experience been quite so smooth. Something was missing, though; we still had to rely on ingenuitive hackers to code games and apps. Not for long: the very next year, Apple launched the App Store and changed everything all over again. The pairing set up the framework that all other mobile computing systems—Android Windows Phone—now follow. But the Cupertino company didn’t stop there; iPods, iPads, and Mac desktops and laptops now all run on a hardware-plus-app-store model. People in the mobile ecosystem alone download an estimated 46 million apps every day.

The original iPhone still blows my mind. Thinking back, it was an incredible sight to see fully rendered web pages on a smartphone with an eerily accurate touch screen. As for the App Store, it’s pretty self explanatory. Apple’s iOS SDK has created app millionaires around the world and spawned an entirely new industry for software developers.

What do you think–are both of these deserving to make it onto their list of the top 25 innovations in the past 25 years?