The iPhone is Taking Over the World

The iPhone definitely is a revolutionary device as it has certainly changed the smartphone market for the better. Even my old first gen iPhone still has some pretty strong legs, since it’s able to run 3.1.2 firmware. Other phones I’ve had in the past would never last 2.5 years and still be upgradable. That’s the beauty of the iPhone.

Of course, I’m not the only one that had taken notice to the iPhone’s capabilities. Now that other markets have slowly been able to purchase the iPhone, Apple’s little jewel is starting to take over the world by storm.

According to recent reports from AdMob, the iPhone is the dominating smartphone in most markets (it’s gaining ground in Asia from Symbian OS). The iPhone now represents 51% of all mobile traffic worldwide–stunning. It is definitely an achievement that Apple has been able to literally take over the world in such a short period of time.

What’s interesting about the AdMob reports is not that the iPhone is dominating the smartphone market, but the fast rise of Google’s Android platform and the decline of RIM, Symbian, and other traditional “leaders”. The game has certainly changed.

What’s next when the iPhone 4G is launched this summer? Let’s not get ahead of ourselves yet, as the January 27th Apple Event will surely result in a tablet of some sort, with the name a closely guarded secret. We will mostly likely see a preview of iPhone OS 4.0 and other goodies Apple will have in store.

So, is it fair to say the iPhone is taking over the world? According to this chart below, it’s starting to look like it. All your base are belong to Apple? 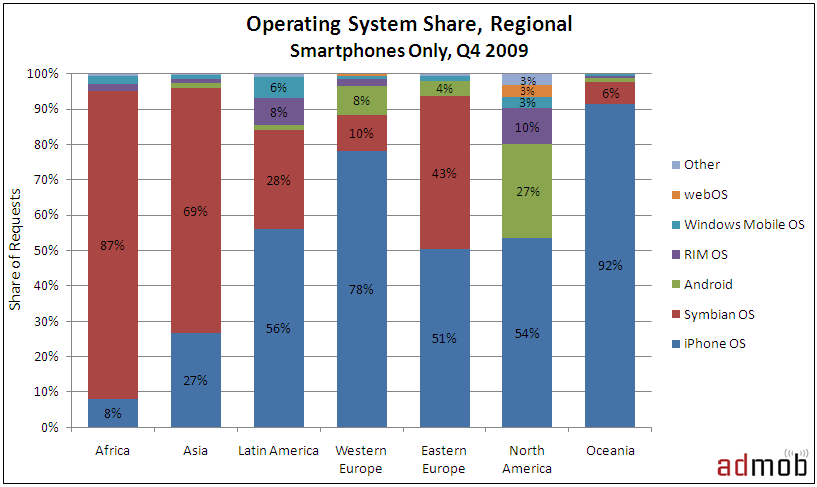