The iPhone has come a long way since its initial launch in 2007 when it was released exclusively on AT&T network with merely a handful of Apple created apps sporting a 320 X 480 resolution display, a 2-megapixel camera and 8 GB of memory. Tomorrow, Apple will be celebrating the five-year anniversary of its most popular invention ever and as revealed by the latest research from Strategy Analytics (via The Globe And Mail), the iPhone family has generated US$150 billion of cumulative revenues for Apple in the past 5 years. The report also notes that Apple has shipped over 250 million iPhone units around the world. 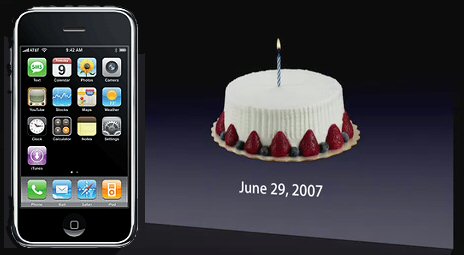 “The iPhone portfolio has become a huge generator of cash and profit for Apple,” said Neil Mawston, the executive director of Strategy Analytics.

“A quarter of a billion iPhones have been shipped cumulatively worldwide in the first five years since launch and Apple reaches its fifth birthday at the top of its game,” he added.

“However, there are emerging signs that the iPhone’s next five years could get tougher. Some mobile operators are becoming concerned about the high level of subsidies they spend on the iPhone, while Samsung is expanding its popular Galaxy portfolio and providing Apple with more credible competition.”

Interestingly, Apple will be celebrating the iPhone’s fifth birthday one day after RIM reports what is expected to be an operating loss for its latest quarter. Happy birthday, iPhone!