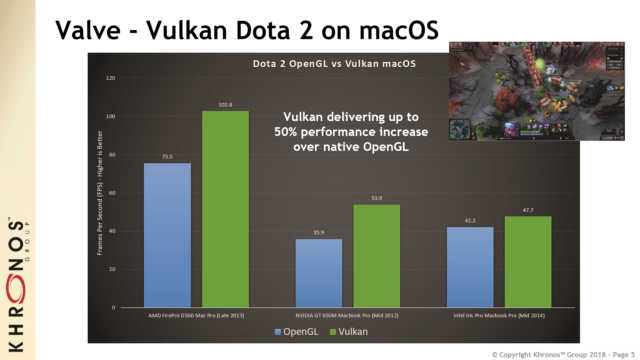 On Monday, the Khronos Group announced that they will be bringing Vulkan to macOS and iOS.

Vulkan is a cross-platform graphics API that is already supported by Android smartphones, Windows, Linux, game consoles, and some VR platforms. The API is able to leverage GPUs from all the industry’s major players, including Nvidia, AMD, Intel, and ARM.

In a report from ArsTechnica, Valve has already been experimenting with the API by using the macOS version of Dota 2. The results are miles ahead of Apple’s OpenGL graphics API that they provide with macOS and iOS.

Valve is an early adopter of MoltenVK. The company has been testing MoltenVK for the macOS version of Dota 2, and indications are extremely promising: the Vulkan-on-Metal version of the game has frame rates as much as 50 percent higher than the version using Apple’s OpenGL stack. Apple’s OpenGL drivers have long been criticized, both for their poor performance and for Apple’s refusal to support the latest versions of the specification. The Dota 2 experience suggests that developers can reap big dividends by bypassing them.

The report notes that MoltenVK does lack a few features of Vulkan, however, given the increase in performance with very low processing overhead, the tradeoffs certainly appear worth it.