The Parliament Hill iPhone App: Prorogued At the Moment

Will We Ever See an iPhone App from Ottawa?

Things works a bit differently here in Canada. Our Federal government could possibly come out with an official Canadian Parliament iPhone app, but that won’t be happening anytime soon. Why? That’s because our current Parliament has been prorogued by Stephen Harper.

Come on now, the 2010 Winter Olympics are starting soon here in Vancouver–so of course it would make sense to prorogue Parliament and give everyone a nice holiday to enjoy the games! 😉 It’s not like our tax dollars are hard at work or anything…err…oh wait…they are.

Anyways, the point I’m trying to make is even if Parliament was running at full throttle, I highly doubt that we’d see an iPhone app from Ottawa. Things work slowly here in Canada, when it comes to getting things done by all forms of government. The debate would probably end up in a referendum on whether or not a Parliament iPhone app should be created.

What do you think? Waste of time and money for governments to create iPhone apps, or an absolutely necessity to reach out to the internet generation? 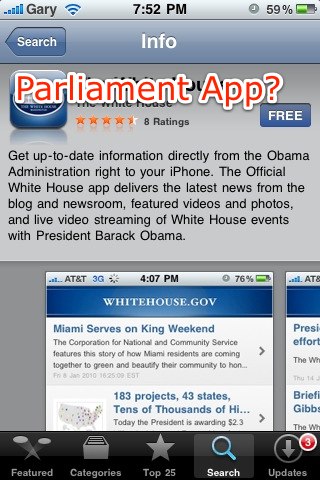