The Science Behind Making An iPhone: Deep Down In The Mines 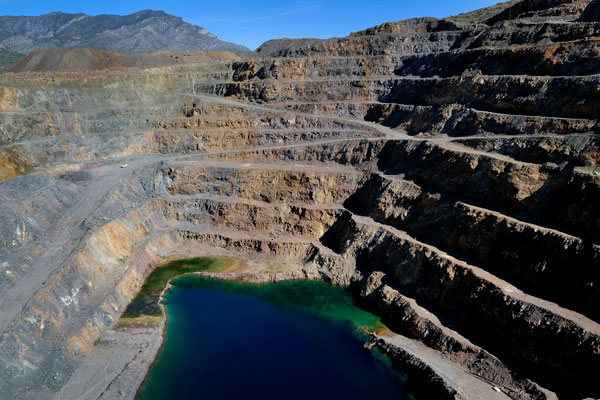 The iPhone is just like any other mobile device or product on earth; the beginning phase begins deep down inside earth. We’ve all learned about the periodic table in school, and the iPhone just so happens to include a range of elements found on the chart. The photo above is of a mine located in Mountain Pass, California. It’s surprisingly 500-feet deep and is one location where vital minerals needed to produce the iPhone are extracted from.

How exactly do minerals inside rocks help form an iPhone? CNET has the answer:

Inside the rocks from this mine are rare-earth minerals, crucial ingredients for iPhones, as well as wind turbines, hybrid cars, and night-vision goggles. Minerals such as neodymium are used in magnets that make speakers vibrate to create sound. Europium is a phosphor that creates a bright red on an iPhone screen. Cerium gets put into a solvent that workers use to polish devices as they move along the assembly line.

That location shown above is one of the very few areas in North America that is capable of providing rare-earth minerals. Nearly 90 percent of rare-earth minerals are found in mines located in China. The graphic below will provide a continued in-depth analysis of the minerals and what they are used for in the iPhone:

The location in Mountain Pass uses molycorp machines to pull an average of 2,800 tons of fresh ore from the ground daily. It’s from there that this ore is taken to a crushing facility and eventually crushed into pebbles. A lot of the ore doesn’t have any value though:

The remainder, about 92 percent of the entire mix, has no commercial value. In Baotou, that mix, which includes slightly radioactive thorium and uranium and other toxic chemicals, goes into the tailings lake. Because it’s still liquid, the waste can leach into groundwater, creating environmental hazards. Molycorp’s proprietary process presses the water out of the tailings in order to reuse it. What’s left is a paste, to which Molycorp adds cement and then lays out in a lined disposal site.

Then later on in the process, the powder elements, such as neodymium and europium are put into bags and sold to customers, some in-which are Apple’s partners. These elements can be used to form the screen, speakers, etc.

Obviously there is a length of science we failed to explain, but that would altogether confuse everyone, including myself. I found the breakdown on the graphic above very interesting; I particularly liked viewing the explanation of what elements were used where in the iPhone.

LG is expanding the availability of Apple TV, Apple Music, AirPlay, and HomeKit support on third-party webOS Hub-enables displays. Over 100 countries and regions will now be able to take advantage of Apple's entertainment options on a growing list of third-party displays. Apple's apps such as Apple TV are currently available on LG's display and...
Steve Vegvari
43 mins ago