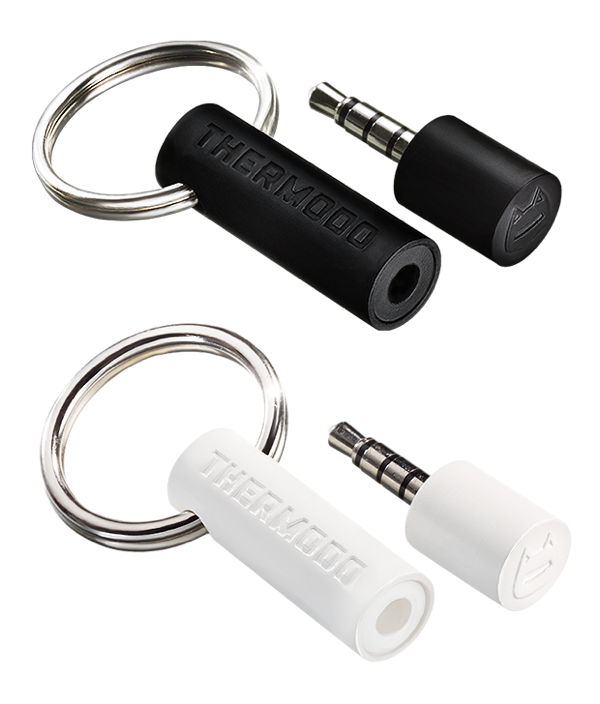 A new Kickstarter project Thermodo is a tiny electrical thermometer that easily plugs into your iPhone, iPod touch, iPad or any Android device’s headphone jack and accurately measures the temperature around you. Designed and produced by Robocat, Thermodo consists of a passive temperature sensor built into a standard 4 pole audio jack, that allows your mobile device to read Thermodo’s temperature straight from the audio input.

Simply plug Thermodo into your device and start the companion app or any other Thermodo enabled apps of your choice. The temperature reading takes place instantly. Thermodo is powered by your device. No external power is required, it can even run in the background while you do important stuff.

Where can I use Thermodo?

You can measure the temperature indoors as well as outdoors. Track the temperature and see how it rises after you turned on the radiator or check how the temperature drops during a summer night. No network connection required. Thermodo comes with a neat little keyring so you’ll always have it with you.

Why would I want to track my temperature?

It’s incredible how much we rely on forecasts and so called “local” temperatures – the truth is that temperature values available online or through apps comes from weather stations that can easily be miles away. Nothing beats taking the measurement yourself right where you are. A small personal weather station with you at all times, how cool is that?!

Just ahead of HBO’s highly anticipated premiere of Game of Thrones prequel series House of the Dragon, a new House of the Dragon: DracARys augmented reality app has been released to download for iOS and Android. Available in English and French, the app offers an immersive, free-roaming AR experience, and allows fans to hatch and raise their own...
Usman Qureshi
15 hours ago

On Monday, Bell Media announced veteran CTV news anchor, Lisa LaFlamme was being let go by the company. Coinciding with Bell’s announcement, LaFlamme broke her silence in a final “sign off” on Twitter, a video that has since racked up 3.8 million views. Her firing has made international headlines in the past 24 hours. LaFlamme,...
Gary Ng
15 hours ago

According to a CTV News report, a coalition of Chambers of Commerce representing border communities is calling on the federal government to scrap the ArriveCan app requirements for travelers crossing the border. A Statistics Canada report shows U.S. visits through land ports are still down significantly across the country. The border-city mayors are therefore also asking...
Usman Qureshi
15 hours ago