Android may be the winner in the short run — see Android’s market share in the US, UK, and worldwide — in the long run, however, Apple wins because of Android’s “weak gravity,” an engagement paradox that marks the whole user experience, a UK market research company has found (via the Guardian).

By surveying 450 British smartphone owners, Foolproof, a London-based user experience company, was interested in learning how smartphone ownership and intention change between the first, second, and third handsets. What they found is a paradox: Android users tend to gravitate towards the iPhone, although the average loyalty to Google’s smartphone OS seems high. Their findings broadly agree with market trends in the US, for example, as measured by CIRP: Android has the largest user base, but the iPhone has the better retention rates. 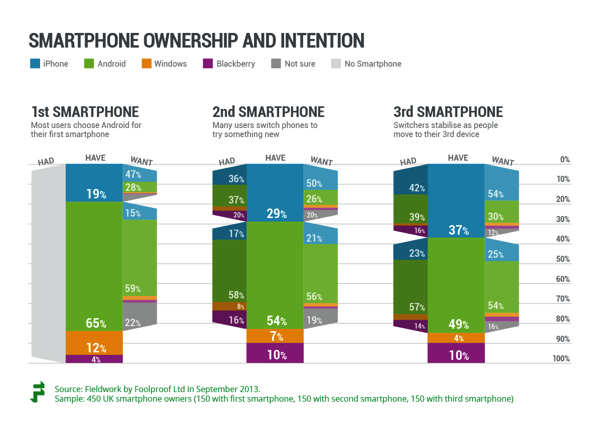 So here is how things look in numbers: The majority, about 59% of first-time smartphone owners, opt for an Android phone. This slightly drops to 56% for second-time buyers and to 54% for third-timers.

This looks “slightly different” on the iPhone’s side: About 47% opt for an Apple handset, a number that then rises to 50%, and finally, 54% of third-timers choose the iPhone. In other words, there is a clear trend towards iPhone ownership as loyalty grows with each purchase. And there is a really simple explanation for this phenomenon:

“If you’re a featurephone user who is coming to replace your phone, then you just want it to do calls and texts – so pricing is going to be important, and other things like the camera quality or apps won’t be a big concern. But as people use their first smartphone and get more experience with it, over time the role that the phone plays in their lives influences their next buying decision. The results that you see here is that people want to choose the best smartphone for their needs,” said Philip Morton, Foolproof’s principal consultant.

“There is a block of stuff that attracts people to the Android platform in the first place, but these get less strong over time. Price is the key thing, but this becomes less important as the phone has more value in their lives.” 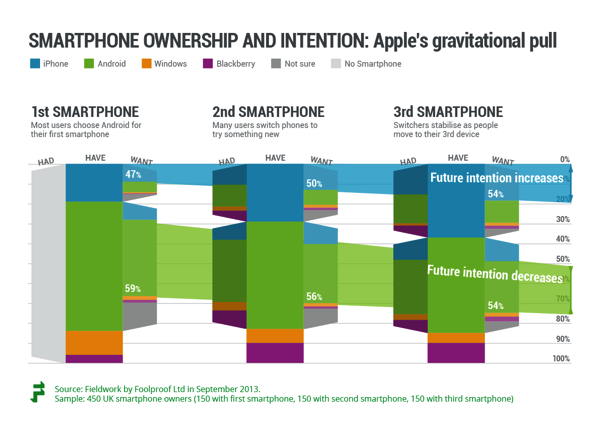 Although the study didn’t look into differences in loyalty between owners of cheaper and more expensive Android phones, Apple’s halo effect seems to work very well.