This could be it guys, as a source as credible as This Is My Next reports Friday, October 21st to be the day the next iPhone will launch. A confidential BestBuy document tipped off by an employee reveals that the retailer is scheduled to install an ‘Apple Fixture’ on this date, strongly suggesting the iPhone 5 launch which has already been rumored by numerous sources for a mid-october release. The source said that a request that “a manager be on-hand at 6AM” is out of the ordinary since they usually show up at 7AM, a similar procedure that happened with the iPhone 4 launch. He also added that all BestBuy stores managers have a meeting scheduled on October 10th regarding upcoming product release dates. 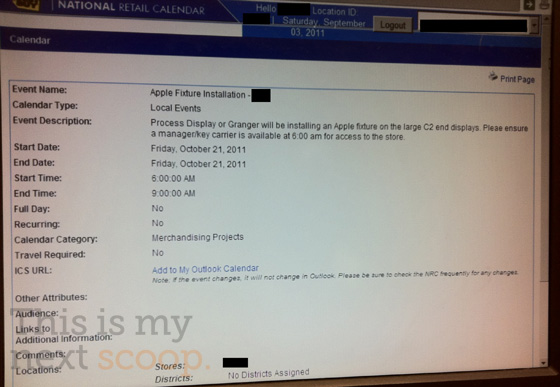 According to This Is My Next,

On a related note, our tipster tells us that Best Buy Mobile managers have a meeting scheduled for October 10th to “discuss upcoming BIG release dates” (emphasis his). Assuming we get an Apple press event for the new iPhone a few weeks in advance, the managers would be well aware of the release date in time to discuss it at that meeting, so that’d support a release on or around the 21st, too.

So go ahead and mark your calendars folks, we might have just gotten lucky with an iPhone 5 release date leak!