As pointed out by the folks over at MacRumors, Apple is offering an extended three-month free trial of its Apple News+ service to all first-time subscribers from today through Monday in the United States, Canada, Australia, and the UK. 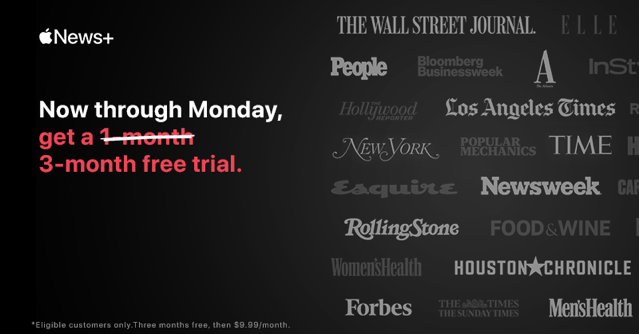 For those who aren’t familiar, Apple News+ offers over 300+ magazines and 30 Canadian magazines, with support for French and English–with free family sharing (for up to 6 family members).

The service costs $12.99 per month in Canada and includes a digital subscription to The Toronto Star, the country’s largest newspaper.

For a limited time, get Apple News+ free for 3 months.

You’ll get:
• World-class journalism from sources you trust
• Full magazine issues, cover to cover
• The week’s best audio stories, hand-picked and expertly narrated, on your iPhone

You can sign up for the extended trial offer directly via the Apple News website in Canada. Once the trial period is over, your Apple News+ subscription will automatically renew at its standard pricing of $12.99 per month, unless canceled prior to renewal.