Will Switching to a Three-Year iPhone Cycle Affect Apple?

Last week, Japanese newspaper Nikkei reported that Apple will likely switch the current two-year cycle to a three-year iPhone product refresh cycle. The report said the reason behind this is that the smartphone is already doing what most people want it to do, while a slowing market is also a possible factor. In a new article at ZDNet, it has been shown that the change may actually have no effect on the iPhone sales. 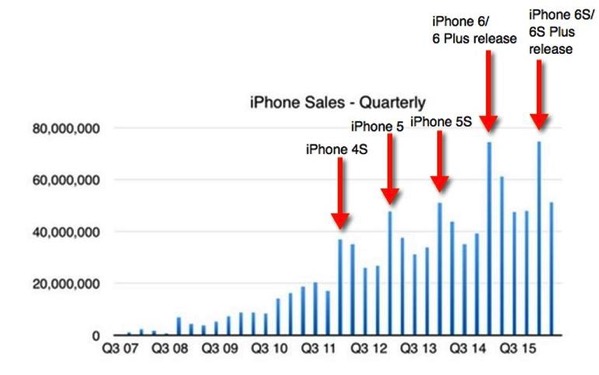 According to the data shown in the above graph of iPhone quarterly sales, notice how over the past five years how iPhone sales have increased following the release of an updated version, irrespective of whether it was an iPhone X release or an iPhone XS release. This seems to indicate that people love new stuff, but that the new stuff doesn’t have to be all that “newer” than the old stuff it’s replacing.

Yes, sales are stronger for the iPhone X release than the XS, but sales of the iPhone XS models haven’t been particularly weak. So, what about upsides from extending the upgrade lifecycle?

One thing I hear a lot from iPhone owners is “I’ll upgrade next year,” because “there’s always a better iPhone just over the horizon.” And it’s true. By introducing some stability into the system, it might encourage people to upgrade sooner. Another advantage of a longer lifecycle – especially when it comes to the outer design – is that it means that we don’t see crazy shifts every 24 months.

So if Apple does switch to a three-year iPhone cycle, it would be wrong to assume all “doom and gloom” for Apple.