TikTok has just announced the launch of its auto-captions feature in Canada, to help the deaf and hard of hearing users better use and enjoy the platform. Previously available in the U.S. only, auto-captions are now also rolling out in Australia, New Zealand, and the UK. 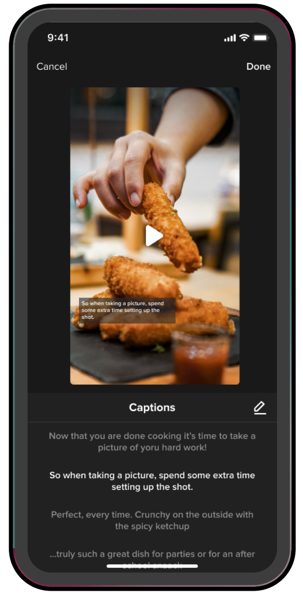 With auto-captions, creators can auto-generate subtitles from their videos. As creators make content, they can select auto captions on the editing page after they’ve uploaded or recorded a video so that text is automatically transcribed and displayed on their videos.

Captions added by creators are part of the video content, and in the event a viewer wants to turn them off they can do so by opening the share panel, tapping the captions button, and setting captions to off.

Auto captions builds on a number of features we’ve developed to make TikTok more accessible to everyone. Given the visual nature of our platform, we’ve designed a number of other improvements as well.

This feature will initially be available in British English (American English and Japanese were launched earlier this year in April 2021), with additional language support in the coming months.

TikTok says its goal is to be accessible to all people, and that it is committed to doing the work long-term.