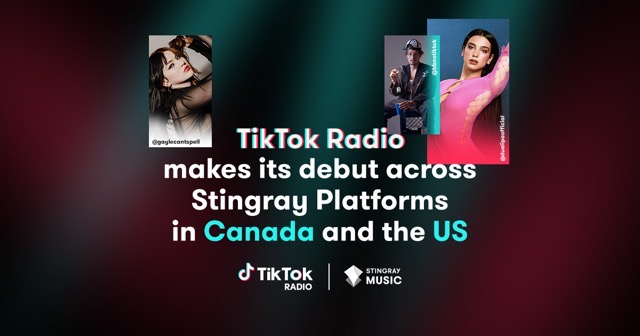 Debuting on Stingray Music on TV, web, and mobile, TikTok Radio will let listeners enjoy music the TikTok community loves, including viral hits, throwbacks, and songs from the next generation of rising stars. The channel will also feature trending sounds and introductions from some of TikTok’s popular artists and creators.

Starting next month, viewers who have access to Stingray Music Videos On Demand through the TV app can also tune in to the TikTok Radio playlist featuring music videos from songs that are currently trending on TikTok. The service is widely distributed across most TV providers in Canada and a variety of TV providers in the United States.

Additionally, Canadian radio listeners will enjoy hearing “The TikTok Trend” on The Stingray Hit List Countdown and “Katie & Ed’s TikTok Pick” on The Night Show with Katie & Ed, two radio shows that will feature tracks that are making waves on TikTok every week.

“Stingray has proven to be a must-have destination for music fans who want to access all the music they love and discover exciting new musical horizons,” said Mathieu Péloquin, Senior Vice-President Marketing, and Communications of Stingray. “TikTok is undeniably influencing music trends and pop culture. We are thrilled to be working with TikTok to bring their groundbreaking content to our growing audiences.

Canadians can tune in to TikTok Radio on the Stingray Music app for iOS and Android, Stingray Music web player, linear TV channels, and TV apps distributed across Canada through TV providers, such as Bell, Rogers, Shaw, and Videotron.