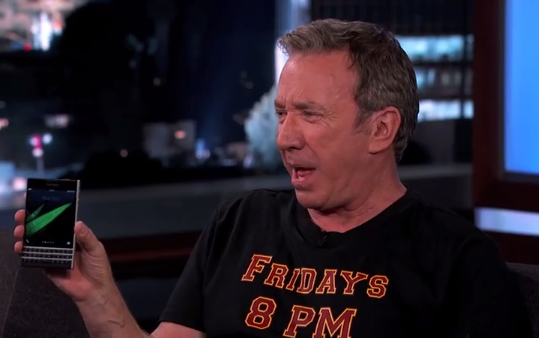 It seems like ages ago we were watching Home Improvement and Tim “the Toolman” Taylor strut his masculinity on the show. Actor Tim Allen was on Jimmy Kimmel last night and when asked if he had the new iPhone 6, he did something unexpected—he whipped out the new BlackBerry Passport for some camera time, taking his host by surprise.

Allen called the iPhone “wonderful” and “tremendous”, but said he likes “the weird stuff” referring to his new Passport, saying “it’s huge” and also “neat” as a “nifty Canadian” product. Was that supposed to be a glowing endorsement?

BlackBerry CEO John Chen proudly told investors at its recent earnings call 200,000 Passports were ordered shortly after its launch. Apple’s iPhone 6 and iPhone 6 Plus—which Blackberry mocked at their press event—sold over 10 million units in its launch weekend, while in China, over 2 million iPhone 6 models were sold on its opening day.

Is Tim Allen the highest profile celebrity BlackBerry can pull to tout their new smartphone on TV (aside from Wayne Gretzky at its press event)? If that’s the case, the company is in trouble.