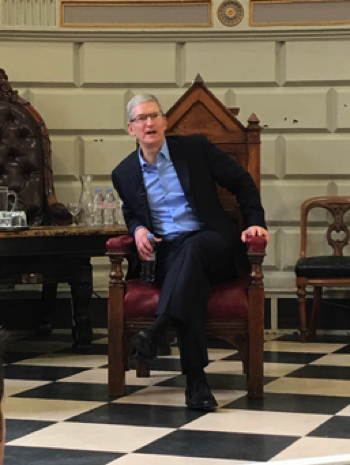 While speaking to students from the Philosophical society in Trinity College, Apple CEO Tim Cook used some sharp words for Microsoft, describing the company’s new Surface Book laptop as “deluded”, reports the Independent. He also told the students that Apple will have “more than 6,000 people” employed in Cork, Ireland, when a new 1,000-job expansion for its Hollyhill campus is completed. “Apple is proud to call Ireland home, we don’t see ourselves as just a company that is in Ireland, we see ourselves rooted here”, Cook said.

Taking about the company’s main competitors, despite saying that Apple’s relationship with Microsoft has improved over the years, he called their latest Surface Book a deluded product:

“It’s a product that tries too hard to do too much,” he said. “It’s trying to be a tablet and a notebook and it really succeeds at being neither. It’s sort of deluded.” On the iPad, sales of which are currently falling as people buy larger iPhones, Mr Cook said he was “bullish”. “I believe the iPad will return to growth,” he said.

When asked about the launch of Apple Pay in Ireland, Cook hinted that the region will get the payment service “soon”.

Twitter's account verification subscription will cost $7 USD per month on the web but $11 per month on iPhone when it eventually relaunches, according to a report from The Information (via MacRumors). Elon Musk, who completed his long-embattled acquisition of Twitter back in October, reworked Twitter Blue to include account verification and a coveted blue...
Nehal Malik
27 mins ago