Apple CEO Tim Cook made a surprise appearance at the Eaton Centre Apple Store in Toronto today, marking the first time the leader has visited Canada since taking over at the company. 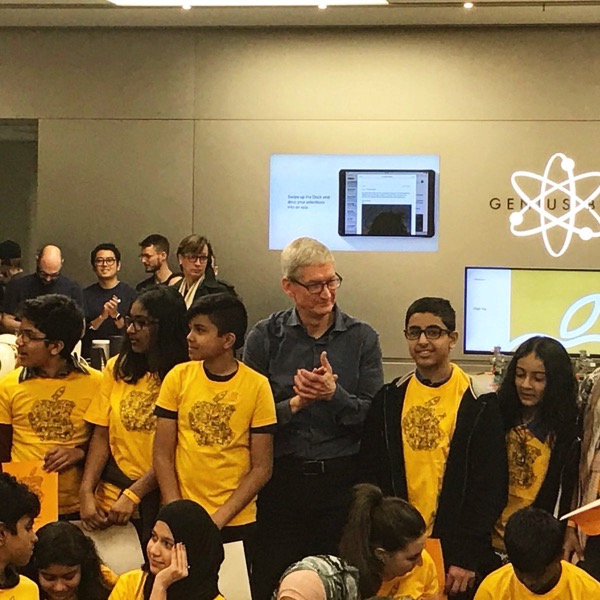 According to Reuters, Cook “surprised a class of children taking coding lessons at Apple’s Eaton Centre location, [saying] he could feel the creativity and diversity Canada has to offer as soon as he stepped off the plane.”

@tim_cook is at the Toronto Eaton centre Apple store! pic.twitter.com/3rQAKmSChV

So Tim Cook was at Apple Eaton Centre today… pic.twitter.com/JJWxRxzRXS

Cook was in the city to promo Apple’s education initiative which focuses on coding education, with products like Swift Playgrounds for iPad and also Apple Teacher.

Recently, Apple expanded its “Everyone Can Code” curriculum worldwide, with Cook emphasizing the importance to “democratize coding”, which can be made possible by teaching it in schools.

According to Apple, there are over 120,000 Canadians working on apps for the App Store.

“Canada is an extremely important market for us. We have a great team in Canada,” Cook said.

“I want to do everything I can do to highlight their innovation, their companies and their work, because it is a critical part of the entire user experience. I wanted to come say thank you,” he added.

Update: As expected, Cook has tweeted about his experience in Canada–in both English and French of course!

Another new support video has been shared by Apple on its YouTube channel, and this one detail how you can customize Focus settings on your iPhone and choose when you want to receive alerts and notifications. While you’re setting up a Focus, you can select people and apps you want to receive notifications from by either...
Usman Qureshi
8 hours ago

Google on Thursday shared a teaser video for its first smartwatch, dubbed the Pixel Watch, ahead of its expected announcement at a launch event confirmed for October 6. Check out Google's full Pixel Watch teaser below: https://www.youtube.com/watch?v=_p7v1PTABSU The teaser introduces us to the design of Google's oft-rumoured smartwatch against the backdrop of some thumpy music,...
Nehal Malik
9 hours ago