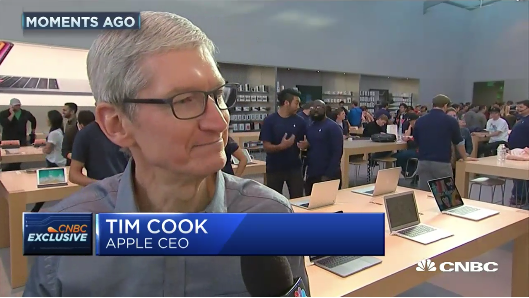 In a TV interview with CNBC, Apple CEO Tim Cook said that Apple is seeing localized sellouts of the iPhone 8 and Apple Watch Series 3 on launch day.

When asked about his reaction to the launch of both products, Cook said:

“I am thrilled. Here’s what we’re seeing right now. The watch with LTE, the Series 3 Watch, we are sold out in so many places around the world. And we’re working really hard to meet demand. We’ve sold out of iPhone 8 and 8 Plus in some stores, but we’ve got good supply there. You can see what’s going on here this morning. I couldn’t be happier.”

While there have still been significant lineups at some stores, some other reports have pointed to low numbers in places like Sydney and New York City. Many people are believed to be waiting for the iPhone X, which begins shipping on November 3.

“The issue is very minor, it will be fixed in a software update. It has to do with the handoff between Wi-Fi and cellular, and we’ll fix that. It only happens in a rare number of cases. I’ve been using it for quite a while and it works great. So we’re very happy about it.”

Online shipments have also been impacted by high demand, with some iPhone 8 Plus configurations seeing a shipping delay of about a week. However, some LTE configurations of the Apple Watch Series 3 will not ship until mid-October.