Apple CEO sat down with Robin Roberts on ABC’s Good Morning America, and discussed a variety of topics, including the new iPhone XS and Apple Watch Series 4. 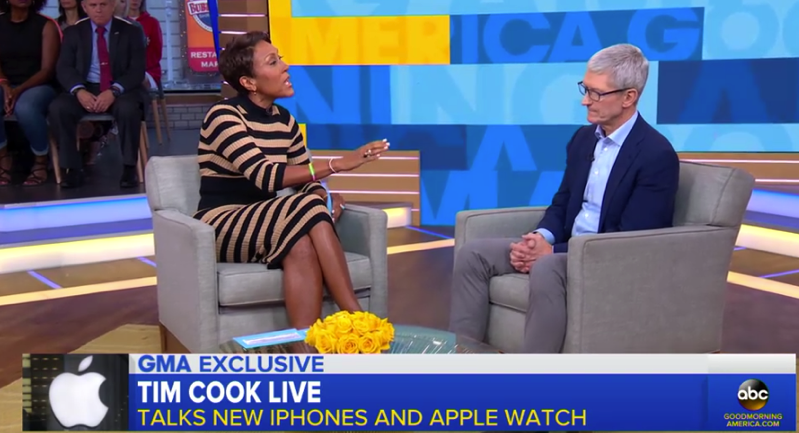 When Roberts asked Cook whether a group of people were being priced out with the new iPhones, which see some models starting at $1100 USD, the Apple CEO responded to say the new model was “the most advanced iPhone we’ve ever built.”

Cook added “we want to make an iPhone for everyone,” while going on to refer to contract pricing with carriers, where “most people pay about $30 a month for an iPhone or $1 a day.”

He also explained to Roberts the iPhone has now replaced your digital camera, video camera, music player and video player and “arguably the product is really important.”

“We found that people want to have the most innovative product available and with that, it’s not cheap to do that,” Cook says. The CEO said “we want to be the best”, adding it’s “not about selling the most, it’s about selling the best,” to which the seemingly Apple-friendly studio audience gave applause to.

Cook also highlighted features of the new Apple Watch Series 4, with its built-in EKG by just placing your finger on the Digital Crown for 30 seconds, plus the new fall detection feature, which calls 911 if you fall and don’t respond to the watch after a minute.

A live Memoji demo also took place, with Roberts and Cook both showing off their characters. Cook said the new iPhone XS camera is the “best camera we’ve ever shipped before,” while also noting he was “so proud” of the new device, saying “people want to make great portraits” and “we want everybody to be able to do that.”

Earlier today, the embargo on iPhone XS and iPhone XS Max reviews was lifted, as early units provided to certain media outlets shared their initial thoughts on the new devices. Most praised the new flagship models, but also said to wait for iPhone XR as well, to see how it will compare.