Apple CEO Tim Cook has shown once again that he is willing to lend a helping hand when needed: The Cerebral Palsy Foundation has a (two) new voice(s) for its “Just Say Hi” campaign, Tim Cook’s (and Siri’s).

It’s a joy to have Tim Cook add his voice (and Siri’s) to our campaign. Tim’s combination of keen mind and kind heart is displayed every time that he communicates his vision to the world. We’re thrilled that his outreach now includes the “Just Say Hi” campaign.

In a video raising awareness of the Cerebral Palsy Foundation shared on YouTube and the foundation’s website, you can see Tim Cook talking about Apple’s belief that “inclusion inspires innovation, and diversity gives the company strength. And that includes people with disabilities.”

He uses Siri to ask how anyone can start a conversation with someone with a disability and Apple’s virtual assistant replies: “It’s easy. Just say ‘hi'”. 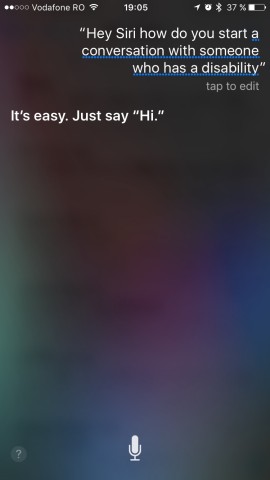 Check out the video below. And, by the way, you can try this on your iPhone or iPad.