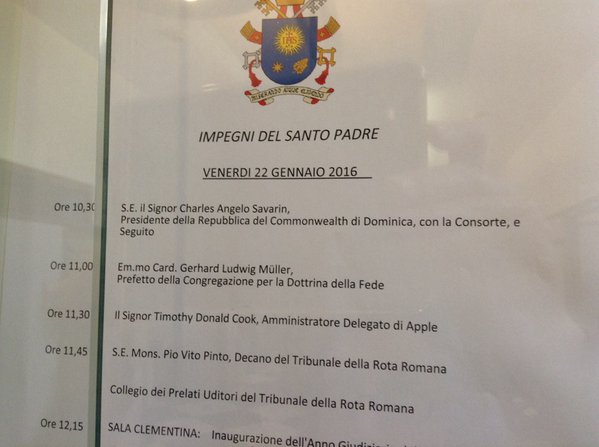 According to various sources, Apple CEO Tim Cook has met Pope Francis today at 11:30 local time in Rome. The Pope’s schedule, revealing the 15-minute meeting, was tweeted today by Carol Glatz (via TechInsider).

It was also confirmed by James Politi, the Rome bureau chief for The Financial Times.

The meeting with Tim Cook follows an earlier meeting with Alphabet Chairman Eric Schmidt. As pointed out by Tom Cheshire of Sky News, both Cook and the Pope are keen environmentalists. The meeting has been in the works for some time.

Pope Francis and Apple have a deeper connection than you might imagine: the Pope was filmed tweeting from an iPad, a device that later sold for over $30,000 at auction. Last September, Apple and the Pope were mentioned together twice in two days: First it was the Pope’s visit that caused delays in iPhone 6s deliveries in New York City.