Upcoming biography titled ‘Becoming Steve Jobs’ by Brent Schlender and Rick Tetzeli, which is currently available for pre-order at Amazon.ca, is set to make some interesting new revelations about the Apple co-founder’s life, including the fact that current Apple CEO Tim Cook had offered Jobs his liver when the ailing Steve Jobs was in need of a donor. Cook offered his liver to Jobs after discovering that he shared a rare blood type with him, but Steve turned his offer down. “Somebody that’s selfish doesn’t reply like that,” Cook says. 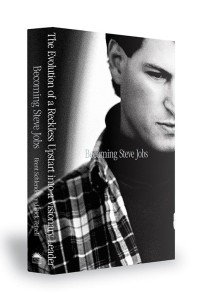 While the book is due for release on March 24, those who’ve pre-ordered it on Amazon can access a significant portion of the biography through the site’s “Look Inside the Book” feature. While Amazon has now blocked out far more of the book’s contents than it initially did, the folks over at CultOfMac were able to read some very interesting stories providing new details into the close relationship between Jobs and Cook, Jobs’ secret plan to buy Yahoo! and much more.

Steve Jobs and Disney boss Bob Iger talked about buying Yahoo! together at one point, a move that would have given Apple an “in” in the search business. While the question of Apple buying Yahoo! has been raised plenty of times over the years, this is the first time there’s been a serious suggestion that Jobs considered such an acquisition.

The book also shares details about Ive’s first meeting with Jobs, upon the CEO’s return to Apple in the late 1990s. In stark contrast to the claims in Isaacson’s book, Jobs apparently told Ive: “I just don’t like television. Apple will never make a TV again.” Ive also ruminates on his shared perspective on design with Jobs, saying, “He and I could talk philosophically about aspects of design in ways we couldn’t with other people. I would get self-conscious if I had to talk in such philosophical terms before a group of engineers, who are brilliantly creative, but when you go on and on about the integrity and meaning of what they are building, well, that’s just not their focus. There were times when Steve and I would talk about these things and I could see in people’s eyes that they were thinking, Oh, there they go again.”

While some might believe we don’t really need another Steve Jobs book, this one seems to cover some very interesting aspects of Jobs’ life which Isaacson pretty much skipped over.