Following today’s ruling of the Supreme Court, which legalizes gay marriage for all 50 states, the District of Columbia and U.S territories, Apple CEO Tim Cook said on Twitter that “Today marks a victory for equality, perseverance and love”, Time Magazine reports. 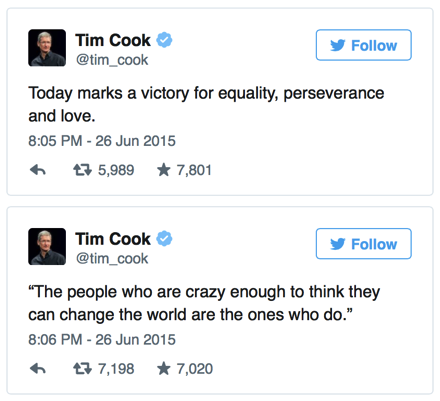 The publication highlights that the economic impact of same-sex marriage legalization is estimated in the billions over the next few years. A National Gay and Lesbian Chamber of Commerce spokesperson said that “There are 1.4 million LGBT business owners are the country – imagine how many more will come out now that the tide of equality has risen so hight”.

“But marriage is not the finish line; it’s the starting pistol. The 2014 buying power of LGBT America is $880 billion — the community’s loyalty can’t be overestimated.”

In addition to Apple CEO, a number of other big U.S. companies also weighed in on the matter on Twitter. Below are some of them:

Here’s to having, holding and marrying who you love. #takepride #SCOTUSMarriage pic.twitter.com/8NLGee0Rl0

From this day forward… #loveislove pic.twitter.com/TrSHAl8mat

Apple is reportedly scrapping its initial plans to increase iPhone production this year due to lower-than-expected demand. Following the launch of its new flagship, the iPhone 14 series, Apple is now reconsidering the scaling of its production. As reported by Bloomberg, Apple has reached out to its supply chain partners. Initially, the Cupertino company is...
Steve Vegvari
32 mins ago