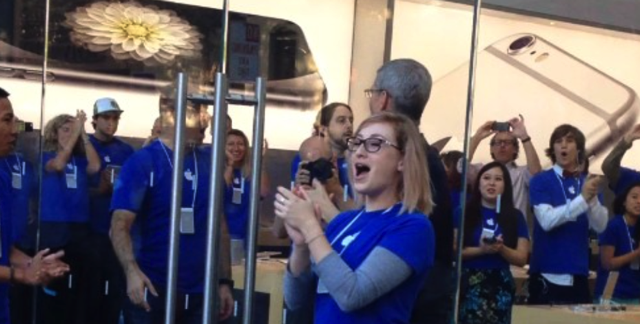 Apple CEO Tim Cook today paid a surprise visit to the line of eager Apple customers waiting for hours to buy the iPhone 6 outside Apple’s retail store in Palo Alto, California. According to BusinessInsider, Cook not only made a personal appearance at the scene but also spent plenty of time with the fans, allowing them to take selfies with him. Wow, lucky folks!

“Inside the store, Tim Cook helped get employees in the mood by joining in with the customary cheering and clapping that accompanies the release of a new Apple product.”

What’s even more interesting is when it was time to let people into the store, it was Tim Cook who was there to open the doors. Check out the following video showing Tim Cook welcome Apple fans inside the retail store!