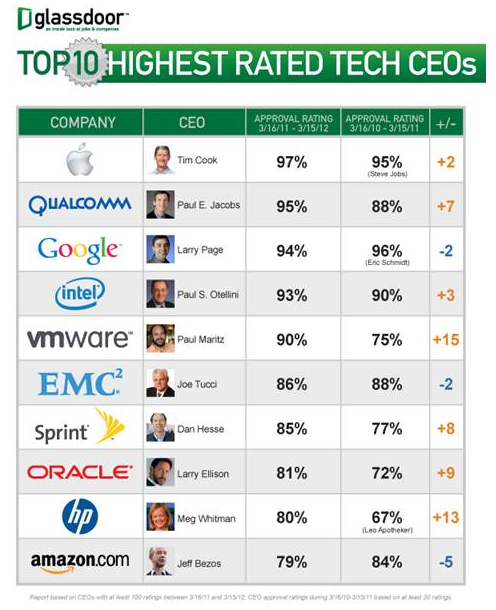 CNN Money is reporting that Apple’s CEO, Tim Cook, is among the highest rated, when it comes to how employees feel their CEO is running the company.

In a study done by Glassdoor.com, employees of various tech companies in the US were asked, “Do you approve of the way your CEO is running the company?”. An amazing 97% of Apple employees think Tim is doing a great job. Tim tops the list, beating out Google’s CEO, Larry Page, by just 3%. What’s even more interesting is, Tim Cook beat out Steve Jobs, in the same survey from last year.

I know some of us Apple fan boys were fearsome when Steve handed the CEO job over to Tim, but obviously Apple employees think he is doing just fine. You have to remember, Tim Cook was Steve’s go-to guy, whenever Steve had to step away from his duties, while he was fighting his illness. Tim is not really that “new” to the job, and we are excited about the future of Apple and what wonderful, wallet draining, products Tim will bring to us. 😉