Tim Cook met with Chinese government officials in Beijing on Monday, according to the Wall Street Journal:

A spokeswoman said Mr. Cook— who is on his first trip to China since becoming chief executive of the Cupertino, Calif., company— “had great meetings with Chinese officials today.”

“China is very important to us and we look forward to even greater investment and growth here,” said the spokeswoman, Carolyn Wu.

Images of Cook were spotted by Sina Weibo users (via TNW) posing with fans inside the Apple Store in the Xidan district of Beijing.

Speculation of why Tim Cook is in there could be related to meetings with Chinese wireless carrier China Telecom, or to deal with the Proview Technology iPad trademark case.

The last time Cook visited China was last June, when he was spotted at the Beijing offices of China Mobile. Given China’s massive 987 million cellphone users (with just under 140 million 3G users), you know Apple wants a piece of that smartphone pie. 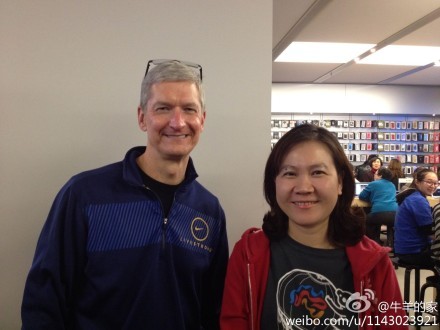