In an effort to demonstrate the dangers of distracted driving and teach the public an important safety lesson, Timmins Police force have recently acquired a driving simulator machine. According to CBC News, the police have so far set up the simulator in local high schools as well as the Timmins campus of Northern College. 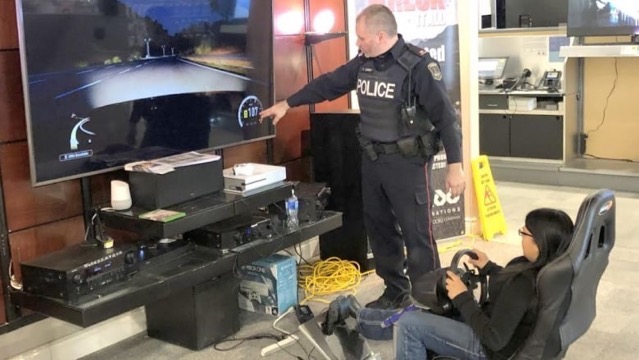 Marc Depatie, the corporate communications coordinator with the police service, said that the simulator is “intended to reach the target of younger, novice drivers with a strong and meaningful message of the perils attached to distracted driving”.

“The Timmins Police Services hopes to deploy the simulator as often as it can at various public venues in the hopes that the message resonates with the younger driving population,” Depatie said:

“Young drivers are over-represented in traffic collision statistics where the common causal factor is an element of distraction due to handheld communication devices.”

“We are also focusing on the older driving population who tend to overestimate their abilities to multi-task with an over-reliance on their years of driving experience.”

The simulator cost the police around $800, while a donation by Glencore and the local DARE program helped pay for it.