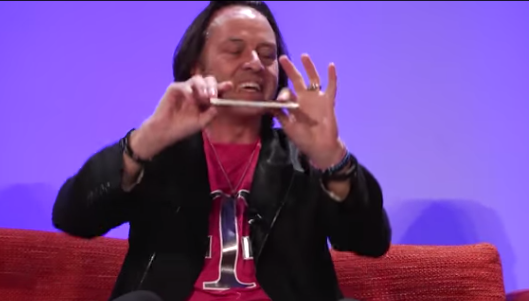 T-Mobile CEO John Legere is one of the most outspoken leaders in the U.S. wireless industry, and his profanity-laced rants have become entertaining both in presentations and beyond.

Speaking at the 2014 GeekWire Summit, Legere shared his thoughts on the overblown iPhone 6 Plus ‘bend gate’ issue, offering his honest (and hilarious) thoughts on the matter (via CNET), at roughly the 20-minute mark of the video below:

“The video of the guy that’s doing this — and if you could have seen his face, he probably would have been purple.”

“The thing moves a little bit? Are you s***ting me? I mean, when was the last time you took any other…this is an amazing supercomputer in your hand. What the f*** are you putting it in your pants and sitting on it for?”

“Those nine people who sat on their phones…first of all, they need jeans that fit them a little better.”

Legere also stated when he first took the CEO position at T-Mobile a couple years ago, at the top of his list was to land the iPhone—which it was granted last spring, bringing AWS bands to the iPhone 5 (which brought iPhone 5 users to WIND Mobile and Mobilicity).

He also noted Apple’s high standards for quality have made T-Mobile a better company, as the former would not offer the iPhone unless the latter’s spectrum and carrier speeds were up to par, thus kickstarting massive capital investment to change the face of the company, known as their ongoing “uncarrier” revolution.