Tomorrow Is A Day ‘That You’ll Never Forget’

Tomorrow is a day ‘That You’ll Never Forget’, according to Apple. On Tuesday, November 16 at 10:00 a.m. Eastern there will be an “exciting” announcement from iTunes.

Here is the teaser Apple posted on their web site this morning. 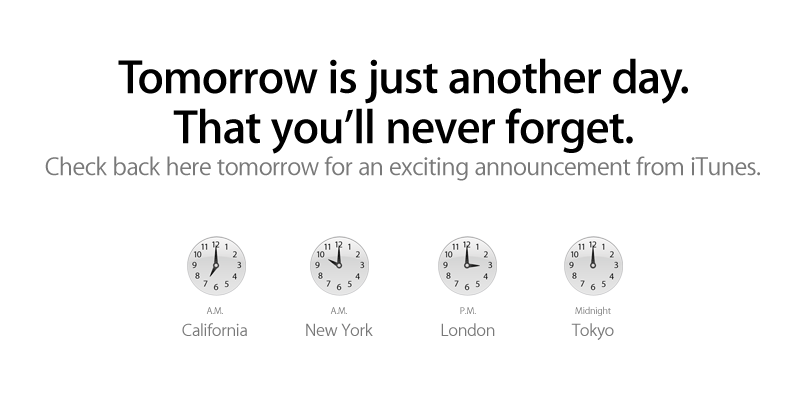 Is this the often rumored “iTunes in the cloud” streaming service? New content deals? A subscription service? An entirely new iTunes app?

Here are some interesting things to consider about this announcement. The clocks in the teaser show London and Toyko time. This teaser is showing up on many international Apple sites including Canada, Australia, Japan, and the UK. There is no live event or keynote planned. Apple just released a software update to iTunes last week.

You would think the addition of a streaming or subscription service would require another major update to the iTunes software. Content deals are usually done on a country to country basis. If it’s new software, why update the old version last week? If the news is that big, why wouldn’t Steve be on stage? This all seems pretty strange, but luckily we don’t have to wait long to find out.

My guess is that the announcement will be the ability to access your purchased content on your iOS device without syncing, it might even involve a new mobile app from Apple.