One of the most hyped up navigation apps for the iPhone 3G and 3GS since the 2009 WWDC has been the TomTom navigation app. Well, wait no longer folks because it was just recently released into the iTunes App Store.

TomTom has a North American version for the iPhone, which includes maps for CANADA and the USA! The app alone is priced at $99US in the US App Store. This does not include the TomTom car mount, which will cost you extra. Here are a few highlights:

If you’ve been waiting for the TomTom turn-by-turn app, this could be the one. But it’s going to cost you an arm and a leg though! At a 1.2GB download, expect to use your computer to acquire this software! 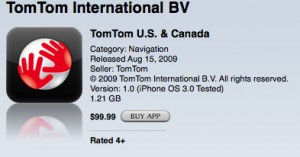 For those who don’t want to fork out $99USD for the TomTom app, we have a review of G-Map Canada coming your way. It’s a turn by turn navigation app for Canada only, has voice instructions and so far does the job. It’s a fraction of the price at $19.99–watch for the review!

Anyone already purchase the TomTom app? How do you like it?