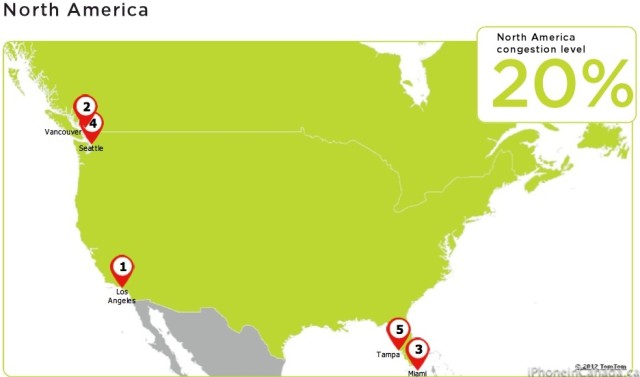 TomTom has released the results of their TomTom Congestion Index, an initiative that started in 2007 with the purpose of revealing real-life driving patterns captured by anonymous user data around the world. The company notes they have built the world’s largest database of historic travel times and the most detailed and accurate real-time traffic info available, used to help guide people to their destinations in the fastest time possible. 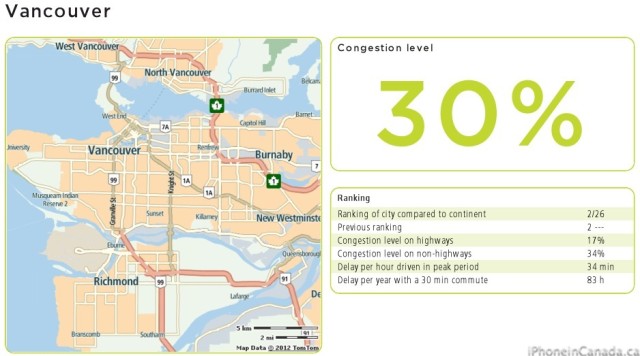 According to the head of congestion research for TomTom, Nick Cohn, he notes the data reveals congestion levels fared worse on local and arterial roads rather than on highways, with major ‘choke points’ being entrances to bridges crossing the Fraser River, along with downtown roads such as Georgia, Dunsmuir and Seymour.

Vancouver city planners years ago decided to avoid a major highway through the city and now travellers are stuck with bumper to bumper traffic during peak times. West Georgia on a weekend is something we all tend to avoid, but somehow end up getting stuck in. As for the congestion report? Cohn had this to say about what city governments can learn from it:

“We also hope that it helps city governments understand a little bit about their relative position and see maybe over time whether their efforts to change the mobility situation in their region are really working,”

What do you think about the traffic in your city as noted in this report? I can attest to the traffic in Vancouver being pretty horrible during peak times.

You can check out the TomTom North American Congestion Index Q1-2012 report here in PDF format.

About a month ago, TomTom revealed it had licensed its map data to Apple as part of Maps in iOS 6.