Yesterday Apple previewed the changes that were coming this summer in iPhone OS 3.0. All I can is: it’s about time! Apple announced a plethora of features that many of us have been waiting for. The team in Cupertino definitely did not disappoint yesterday.

They started us off by telling us about 17 million iPhones sold, along with 13 million iPod Touches. That means OSX is on 30 million mobile devices. I can see the dollar signs in the eyes of developers!

Cut, Copy, and Paste: Refreshing the Gizmodo and Engadget live blogs yesterday did not do any justice to this latest feature. After watching the Apple Event video itself, I was dazzled by how seamless and intuitive copy and paste was throughout multiple applications such as Mail, Notes, SMS, Safari, etc. Shake to undo or repeat is pretty awesome.

Push Notifications: Just when you thought you couldn’t keep your hands off the iPhone during dinner or while in bed, the implementation of this feature will drive your wife/girlfriend mad (unless they are also equally addicted to the iPhone!). I’m miffed that background applications were not introduced, but after hearing Apple’s explanation of decreased battery life and performance it does make sense. We’ve all had tonnes of applications running on our PC/Mac computers and experienced sluggishness. I can only imagine the iPhone buckling under that weight, unless new hardware is released this summer too!

Spotlight and Search: By scrolling to the left at the homescreen, you will enter Search. This will search contacts, emails, songs, notes, and apps on your iPhone. It’s literally Spotlight on your iPhone. There is also a new stand alone app for Spotlight on your homescreen. My favorite feature of Search is the ability to search within the Mail app. If you have an IMAP account setup, you can even extend your search to the server! Now that is going to be awesome!

Peer to Peer Networking: We will now be able to connect to other iPhones via Bluetooth to play games and use other applications. In the Apple Event video they demo’d how you could be able to send a SMS invite to a friend to join you within the game LiveFire itself. Definitely very cool.

Landscape: Before landscape was only limited to Safari, but now it will be widely available in Mail, Notes, and SMS (plus in Stocks app). With landscape, you can now type even more accurately as the keys are more spaced apart.

This Might Change Your Life, 25 Cents at a Time

MMS Support: Beyond sending of pictures via MMS, we will now be able to send voice notes, contacts, and your location. Now, this might seem like fun and games, but if your Rogers/Fido Value Pack does not include MMS, you will be paying for it! It costs 25 cents to send a MMS with Rogers, but it is free to receive. You’ve been warned! 😉

Buying the 6GB/$30 Data Plan is Going to Pay Off

Now, I’m glad that I purchased the 6GB/$30 data plan from Rogers. What made me realize this was the preview of the ESPN app that included streaming sports highlights. Hopefully this app will be available to Canadians, but I can see maybe TSN or Sportsnet coming out with iPhone apps, and I can imagine myself watching NHL highlights on the go. Now that would be just amazing!

Apple mentioned over 100 features coming, but here’s a screenshot of some features they didn’t go into too much detail about: 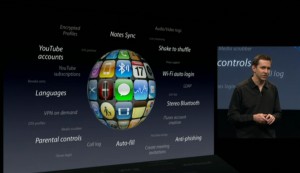 I was definitely surprised by the massive list of changes coming to iPhone OS 3.0. Sure, some of these features took a while but better late than never. What makes the iPhone very unique is that in the snap of a finger, one firmware update can improve and change your device for the better. Other manufacturers release firmware updates to squash bugs, but rarely do they drop so many new features.

Anyways, I could go on forever about all the new features. What was your favorite part of the Apple Event announcement? I didn’t cover everything, so feel free to chime in.