According to Twitter Canada, the Toronto Blue Jays are the most followed Canadian pro sports team on Twitter. Ahead of the 2017 MLB season kick off on April 3rd, the team’s official hashtag on Twitter this year will be: #LetsRise. 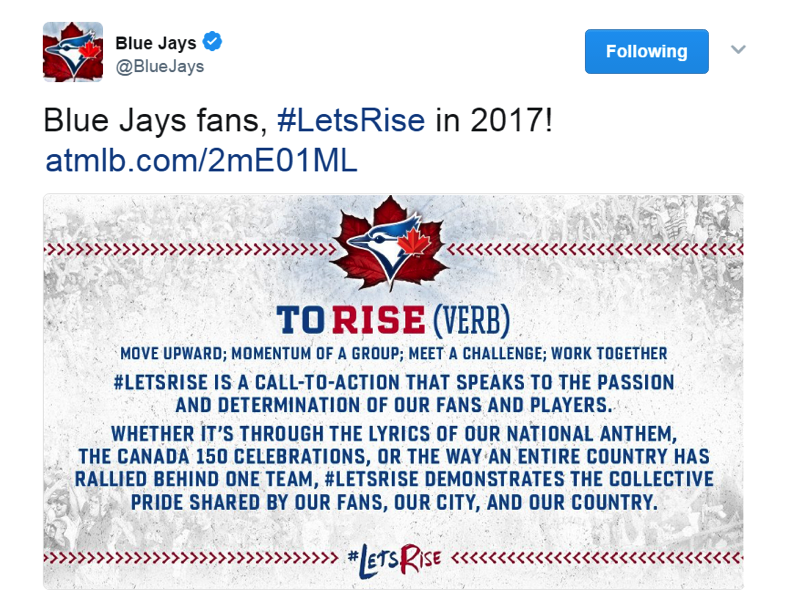 Previous official Blue Jays hashtags saw #ComeTogether rise up in 2015, while last year it was #OurMoment. Twitter Canada says these two hashtags have been mentioned over 1.2 million times combined over the past two seasons.

The Toronto Blue Jays are the second most followed MLB team on Twitter, only trailing the New York Yankees. Last year saw the Jays gain over 320,000 new followers in the regular season, while the postseason added over 250,000 more.

Here are the top five most followed MLB teams on Twitter:

Twitter Canada says the @BlueJays are on pace to be the first Canadian pro sports team to pass two million followers, expected to reach the milestone early in the 2017 season. Below are the top five most followed pro sports teams in Canada:

Get ready to see a tonne of #LetsRise hashtags in your timeline starting April 3rd.