Toronto Police Service has launched a new iOS app that allows users to report crimes and get police information about crime prevention across the city, directly on their iPhones. According to The Star, the app will allow users to file certain police reports, get safety alerts, locate police stations, file traffic complaints, and receive notifications from police social media accounts, among other features. 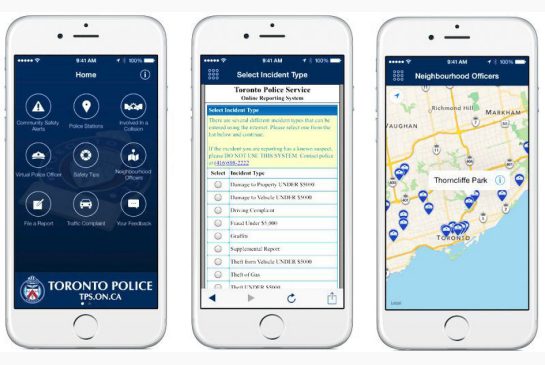 Const. Hugh Ferguson said during a press conference today that the app will help Toronto Police “with the relationship we have with victims”. He explained that residents can use the app to report incidents that include damage to property or vehicles under $5,000, fraud under $5,000, theft under $5,000, graffiti and driving complaints, among others. Furthermore, users can also contact Toronto Crime Stoppers anonymously through the app.

“It gives the public an opportunity to report crime when it’s convenient,” Ferguson said. The TPS Mobile App also includes a virtual police officer, to whom users can direct questions, and police safety tips. However, dialing 9-1-1 is still the best option during an emergency, Ferguson said.

“We are extremely excited to welcome the Toronto Police Service to the MobilePD family,” said Kushyar Kasraie, CEO of MobilePD, the developer of the smart phone software, in a statement. “Since our beginning, we have worked to make local communities safer and increase cooperation between law enforcement agencies and citizens. We can’t wait to see how Toronto benefits from this technology.”

The app is now available for download on iOS as well as on Android, and will be added to BlackBerry and Windows phones in the coming weeks.