Kavita Kapil, a 29-year-old Brampton resident has created a new app called ‘Bride + Groomed’ that aims to help simplify the process of planning South Asian weddings, by allowing couples to find anything from fully-customized checklists, timelines, budgets, and more for their wedding (via Brampton Guardian). 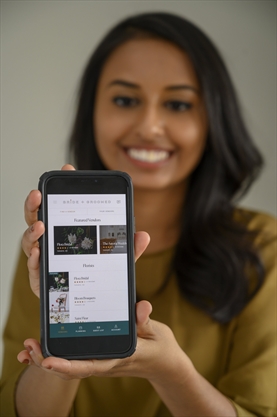 “These past two years, I’ve planned about ten weddings — including my brother’s and cousins,” said Kapil, who came up with the idea of the Bride + Groomed app after planning weddings in her own family.

“I know with South Asian weddings, it can get so overwhelming because of all the pre-wedding events leading up to the actual wedding,” she added. “This app can help plan all those events.”:

“I felt that everyone was struggling with the same type of issues and I helped figure out exactly what to do, how to stay organized and where to find vendors across the Greater Toronto Area.”

Currently, South Asian couples can find vendors at wedding shows in the Greater Toronto Area that happen a handful of times each year, she added. This app helps to connect couples with vendors if they miss the show, just the way a trusty wedding planner would, she said.

The app currently caters to couples in Brampton and across the GTA, while the ultimate goal is to launch the app across Canada and the U.S.

Bride + Groomed is scheduled to hit the App Store and Google Play on Sept. 4.