The Reachability feature implemented with iOS 8 in the iPhone 6 and 6 Plus has already revealed that the home button and the fingerprint sensor beneath can be used for much more than just authentication. A freshly granted Apple patent goes even deeper into this matter and reveals additional functionalities that could enhance the iDevice’s security. 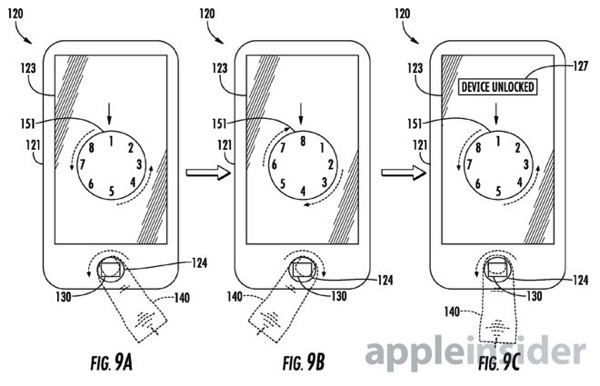 The new patent entitled “Electronic Device Switchable to a User-Interface Unlocked Mode Based Upon a Pattern of Input Motions and Related Methods” describes ways in which Touch ID could allow uses to unlock the device by interacting with a UI (user interface).

In one embodiment, users can rotate their finger in a context that mimics a combination lock that aims to protect the owners’ device. Another example would be the “swipe pattern”, which some of us know from Android phones, but here you don’t move your finger on the display but on the Home button.

Although this may sound interesting, we are wondering if this is something you’d like to do, since this would mean that you are losing time entering passcodes once again. Passcodes have been replaced by fingerprint authentication that speeds up the process of unlocking the device.

AppleInsider speculates that the patent only serves to highlight the potential of the fingerprint sensor built into the home button. Apple credits Dale R. Setlak, co-founder of AuthenTec, and the patent was first filed for in June 2013.