Ramping up to the release of a new iPhone in September we have been showing you some mockups of what it may look like – maybe we have already seen it – and some are kinda cool and some make you think, “Apple would never do that?” but what about a transparent iPhone?

You don’t have to stretch your imagine too far to imagine an iPhone with a see-thru case so that you would see the innards like the circuit board, processor and battery, right? It turns out that researchers at Stanford University are trying to extend that imagination and have developed a transparent battery. Professor Yi Cui and graduate student Yuan Yang have invented a transparent, and slightly flexible, lithium-ion battery. 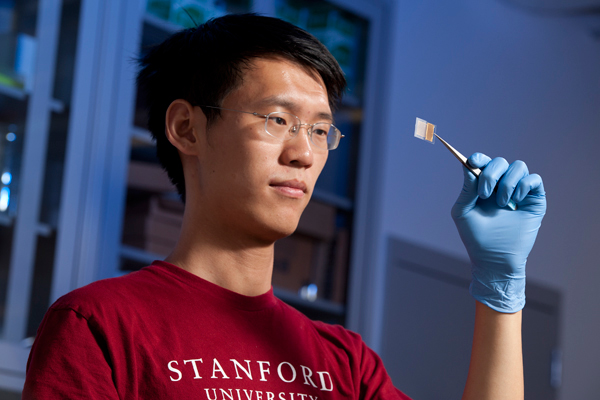 How did they do this?

Yang and Cui devised a mesh-like framework for the battery electrodes, with each “line” in the grid being approximately 35 microns wide. Light passes through the transparent gaps between the gridlines; because the individual lines are so thin, the entire meshwork area appears transparent.

Right now the only drawback is that transparent batteries are not as powerful as traditional opaque batteries. They are about half as powerful as an equally sized traditional lithium-ion battery but Cui is optimistic that higher energy density can be achieved.

If Yuan Yang and Professor Yi Cui of Stanford University get their way, they will be sitting down with Steve Jobs to discuss implementing their new invention in a future iPhone version:

Grand contributions to science aside, though, there was definitely a bigger motivating force behind Yang and Cui’s research.

“It just looks cool,” said Cui. “I want to talk to Steve Jobs about this. I want a transparent iPhone!”

I’m interested in the engineering aspect of this but could you see yourself using a transparent phone?