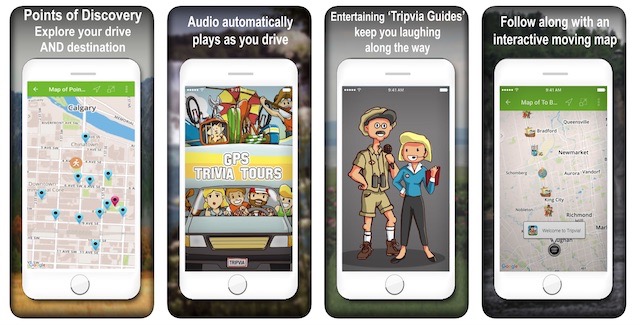 “I enjoy trivia, I wouldn’t say I’m very good at it necessarily,” Donkers said. “But I do enjoy learning about things and I actually had a lot of fun writing all of the topics because I learned a lot.”

The app offers trivia on popular road trip routes like Calgary to Lake Louise and Toronto to Wasaga Beach and Blue Mountain. Tours can be downloaded via wifi and a phone’s GPS used to track its location as it passes through geofences around points of interest:

“As soon as your phone enters a geofence, it’s triggered to automatically play the audio clip that we’ve preloaded over your vehicle’s stereo,” Donkers said. So it would tell everyone about what they’re driving past.”

On the Saskatchewan route, which stretches along the Trans-Canada Highway between Swift Current and Moosomin, those points could include the T-Rex Discovery Centre, the Willow Bunch Giant, RCAF Snowbirds and Cypress Hills Provincial Park.

While Donkers created all of the content, questions, and branding on the Tripvia app, he outsourced its creation to a developer. You can grab the app for free using the following App Store link.