TSMC Posts Record Profits in 2016, Thanks to Apple’s New iPhones 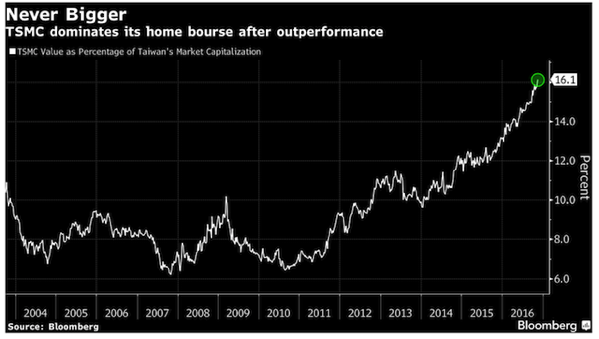 Taiwan Semiconductor Manufacturing Co. (TSMC), the world’s largest contract chipmaker, is luring investors with record profit as growing demand for the iPhone 7 and iPhone 7 Plus is fuelling orders for its processor chips. According to Bloomberg, TSMC’s stock surged 32% in 2016, climbing to its highest level and taking the company’s value to $156 billion, which now accounts for 16% of Taiwan’s entire equity market value.

“Samsung’s issues and the perceived benefit for Apple is surely creating some optimism,” said Sandy Mehta, chief executive officer of Value Investment. “TSMC is the best in class. Valuations are not very high for TSMC, and rising estimates have led to investor optimism. The shares could still have upside.”

Analysts are projecting that the company’s net income will increase 30% this quarter, with profit climbing 28% in the previous three months to $3.1 billion from a year earlier. TSMC has been able to count on demand for the new iPhones to fuel sales of the A10 processor it makes, helping it weather a slowdown in the global smartphone market as it invests in more advanced production technology.

Elizabeth Sun, a spokeswoman at TSMC, said that the company will “soon” start mass production of chips using 10-nanometer processors, which would give handset makers more room for new hardware features.