Starting today, people can add descriptions also known as alternative text (alt text) to images in Tweets using their iOS and Android apps, a new feature introduced by Twitter today that makes Tweets with images accessible to the visually impaired. “With this update, we’re empowering everyone to ensure content shared on Twitter is accessible to the widest possible audience”, notes Twitter in an official blog post. 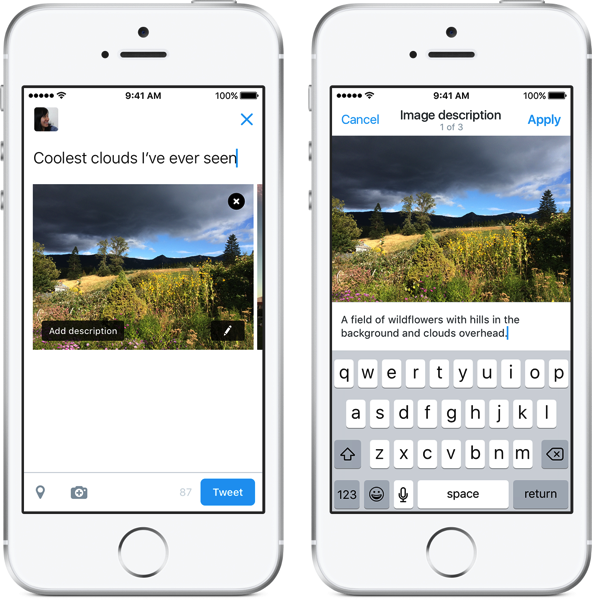 The new feature can be enabled by using the ‘compose image descriptions’ option in the Twitter app’s accessibility settings (more info here). Once done, the next time you add an image to a Tweet, each thumbnail in the composer will have an ‘add description’ button. Simply tap it and add a description to the image. People who are visually impaired will have access to the description via their assistive technology. Twitter notes that descriptions can be 420 characters long.

“We’re excited to empower our customers and publishers to make images on Twitter accessible to the widest possible audience, so everyone can be included in the conversation and experience the biggest moments together.

To ensure publishers and third-party clients also have the capability to add alt text to images, we’ve extended our platform products to both the REST API and Twitter Cards. We know this is especially important for specialized Twitter clients for the visually impaired such as EasyChirp, Chicken Nugget, and The Qube”.

To take advantage of the new feature, make sure you update the Twitter app on your iOS device to the latest version and enable the feature in the app’s accessibility settings.