Tapbots has released mandatory updates for its Tweetbot versions 2.8 and 3.3, after Twitter contacted them to make some changes related to the Twitter API:

A couple weeks ago Twitter’s Platform Operations group contacted us and asked us to make a small change to the way Tweetbot communicates with the Twitter API. This change will have no affect on the way Tweetbot works, however two things will occur once this change goes live. All versions of Tweetbot prior to 2.8.8 or 3.3.2 will stop working and you may need to log into your account again. So make sure you are running the latest versions of the app and be prepared to authenticate your account once more. 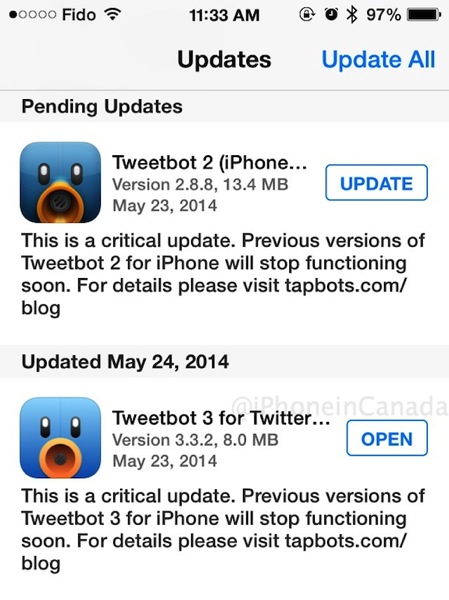 Tapbots says they will be working with Twitter to make the final changes on May 29, 2014 at 10AM PST.

If automatic updates aren’t enabled on your iOS device, you’ll want to make sure you install the latest updates which are available right now.