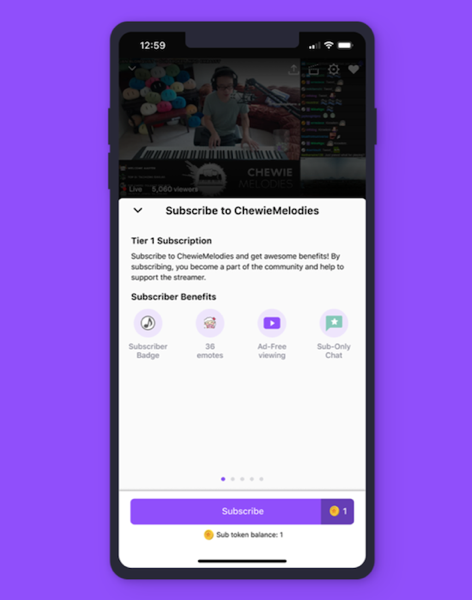 As detailed by Twitch on its website, subscriptions on iOS work differently than on desktop. Here’s how it works:

Viewers first need to purchase iOS Sub Tokens through the Twitch app. Each token can be redeemed for a one-month Tier 1 subscription. You can then extend your subscription by redeeming more tokens or by purchasing more tokens to redeem later:

These Sub Tokens can be redeemed on any Affiliate or Partner channel that offers Tier 1 subscriptions, and they offer the same benefits as if you subscribed on desktop: sub badges, subscriber emotes, ad-free viewing, sub-only chat—all of it.

Creators get paid a share of the iOS subscription, just as they do for subscriptions purchased on other platforms.

Twitch says that to ensure streamers earn a similar revenue from Subs regardless of platform, iOS Sub tokens cost $5.99 to account for mobile app store fees.