Twitter Moments launched in Canada back in April of 2016, allowing users to curate their own stories in a series of tweets. The ability to create Moments was possible on iOS, Android and desktop, but in a recent announcement, Twitter says they are ending the capability on mobile apps.

The Twitter Support account tweeted “On October 23, we’re removing the ability to create Moments on the Twitter for iOS or Android apps. When features aren’t used as often, we’ll remove them, so we can focus on building other products you’ll love.” 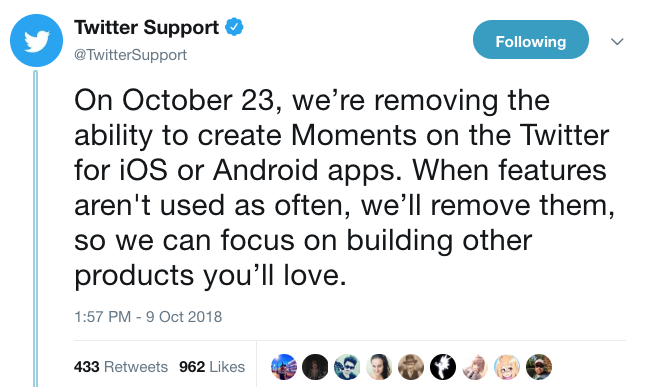 The ability to create Moments will now only be possible on Twitter.com on the web. We never used Moments and looks like others have felt the same about the feature.

First Twitter for Mac ends earlier this year, then changes in the legacy Twitter API for third-party applications went the way of the Dodo bird. Now the ability to create Moments on iOS and Android is getting the plug. What’s next?