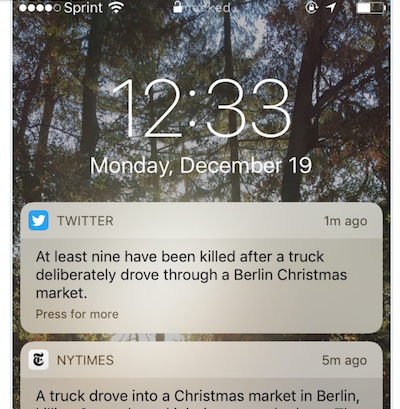 According to a report by BuzzFeed, Twitter has started pushing breaking news notifications to select users, as it did earlier today after a truck crashed into the Berlin Christmas market. Users that linked to Twitter’s Moments tab, which summarizes the news in tweets, received the breaking news alert. The company also sent a similar alert when Fidel Castro died last month.

“In the past, the company has also sent some users notifications about The Bachelorette, for example. The company uses an algorithm to decide who gets notified about what topics. And remember, it’s a test, so there’s a chance it might go away.”

A Twitter spokesperson has confirmed that these alerts are a part of a larger test notifying users about real-time content appearing on the platform.

If you’re also receiving these breaking news alerts from Twitter but don’t like them, you can simply head into the settings section of the app and turn the notifications off.