In an effort to make its platform more appealing to users, Twitter has continued to ink partnerships for live-streaming content. The latest in the series is a partnership with ESL and DreamHack, which enables live streaming of esports events. What makes this more interesting, however, is that ESL will also produce original content for Twitter in 2017. 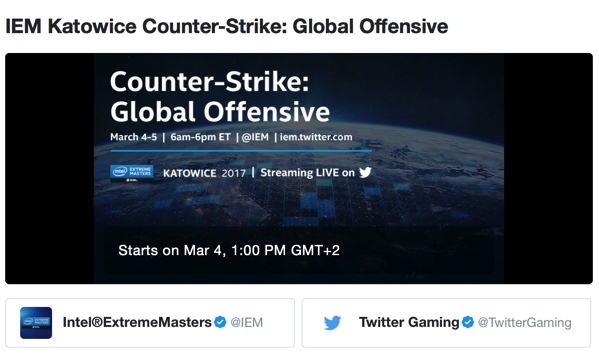 “Esports is growing at a rapid pace and we see this collaboration as a way to tap into the engaged audience of gamers that are already using Twitter as a primary source of content,” said Anthony Noto, COO at Twitter. “By partnering with the leading esports companies like ESL and DreamHack, we look forward to bringing the best of esports live video and conversation together on Twitter.”

The live content on Twitter will be available at esl.twitter.com, iem.twitter.com, and dreamhack.twitter.com. Of course, this wouldn’t be complete without advertising packages with TV-style ad spots. That’s for everyone to make money out of this new service.

United States Senator Michael Bennet wrote a letter to executives of both Apple and Google, calling for the tech giants to remove TikTok from their respective app stores. Bennet believes that the Chinese-owned video creation platform poses security threats, furthering the same narrative that's been brewing for a number of years. Apple's Tim Cook and Google's...
Steve Vegvari
15 mins ago