It’s the beginning of November and Starbucks Canada wants you to get ready for their holiday red cups. The coffee chain has become the “first promoted brand Twitter emoji in Canada,” Twitter explains to iPhone in Canada via email, through the hashtag #RedCups, which will show the following emoji below: 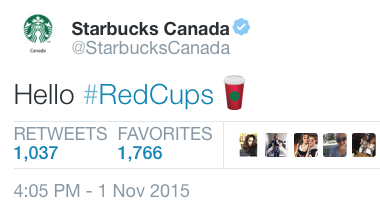 Twitter says users will be able to throw out the #RedCups hashtag—which started yesterday—until November 16, 2015.

Unique Twitter emoji can get brands trending quickly on the social network. We’ve previously seen Canadian-specific emoji such as the maple leaf for Canada Day and recently a hockey puck as part of an NHL campaign. The emojis show up with the native Twitter iOS app, but not in third party apps like TweetBot.