In an effort to make it easier for users to capture photos, videos, and live footage and connect them to their conversations, Twitter has introduced a new ‘TwitSnap’ camera feature (via TechCrunch). The new feature has started rolling out today and will be made available to Twitter users worldwide in the next few days.

See it? Tweet it! Our updated camera is just a swipe away, so you get the shot fast. Rolling out to all of you over the next few days. pic.twitter.com/moOEFO2nQq

When you swipe left from the Twitter timeline, you’ll see the new Snapchat-style camera that allows you to capture media along with options to overlay a location, hashtag, or some text on a coloured label. 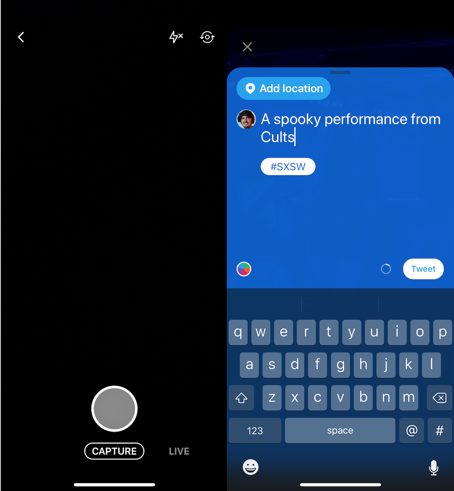 The camera button records photos with a tap and looping videos up to two minutes long if you hold. A mini-swipe over and you can record video or audio-only live broadcasts.

“For now, there are no stickers, filters, light enhancements or other creative tools in the Twitter camera the way there is in the image uploader in the tweet composer. Twitter tells me it wants to focus on tags that will pipe content into the right conversations instead of beautifying the media. That’s a different tack than YouTube, which just started rolling out augmented reality face filters.”

Media shared using TwitSnap will be shown in a larger, more immersive format in the feed with the imagery appearing before the text in a tweet.