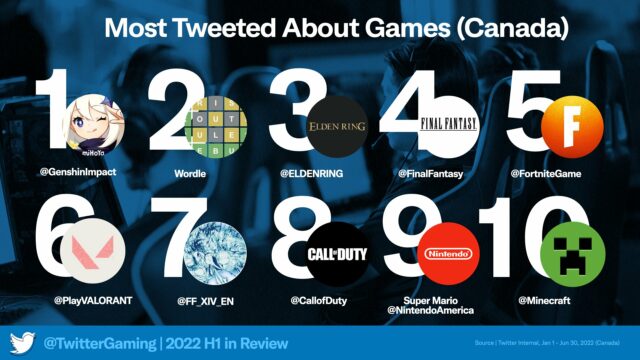 Twitter has revealed some new interesting gaming insights for the first half of 2022. Encompassing Q1 and Q2, Twitter details some global milestones as well as Canadian trends seen on the social media platform.

To begin, Twitter saw a staggering 1.5 billion tweets made regarding gaming in the first half of 2022. The company states that this marked a record half following the record year Twitter saw for gaming conversations in 2021. Twitter states that the increase comes to an estimated 36 percent year-over-year.

From a top level, this increase in the conversation has been marked by the global success and mass adoption of From Software’s Elden Ring. Call of Duty League, VALORANT Champions Tour and Professional Gamers League Counter-Strike: Global Offensive has also been key to driving the conversation. From an events standpoint, the Xbox and Bethesda Games Showcase, Playstation’s State of Play and Summer Game Fest gave Twitter users a lot to talk about as well.

Looking at Canada specifically, here are the top 10 most mentioned games on Twitter (between Jan 1 and June 30, 2022):

With that said, unfortunately, Canada does come short of making the list of countries tweeting about gaming the most. Here are the top 10 countries:

The top 10 most tweeted about esports players are:

2022’s most tweeted about esports teams include:

Plus, the most tweeted about esports leagues:

Finally, an interesting addition to Twitter’s gaming insights is the inclusion of the top five most engaging communities: