For the first time, Twitter has entered the ring to battle against various twitter clients. We’ve seen a lot of apps available or twitter, too many to even name infact. But this is the first we’ve seen of something similar that is actually created by Twitter themselves.Â  Twitter has always had a slimmed-down mobile client while the new preview at mobile.twitter.com, will come with almost all the features and graphics of the main site.

Although it doesn’t have as much to offer as the Apps available in the AppStore, it’s a definite improvement from the other mobile version, and the official blog on the subject says that they still have lots of visitors, despite all the other third-party clients out there.

In order to try out the new version, it’s best to use a WebKit browser such as Safari on the iPhone. The new mobile interface will not replace the m.twitter.com experience for the time being, but you can look for that switch to happen in the coming months.

Leland Rechis of the User Experience team writes:
What may be a less known fact is: Lots of people access Twitter on their phones via our good olâ€™ mobile website, and trusty â€˜mâ€™ has been delivering tweets faithfully. However, â€˜mâ€™ doesnâ€™t fully feel like Twitter, and could probably do a bit more things for you.

â€˜Mâ€™ should also be fantastically innovative â€” naturally the best way to do that is use our own APIs. So, the mobile team here built a brand new mobile web client from scratch, using only Twitter APIs, and weâ€™d like to share the results with you. 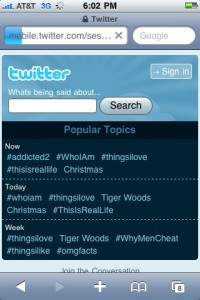 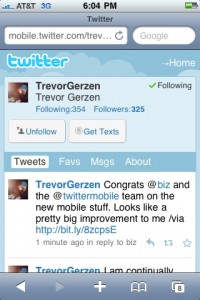 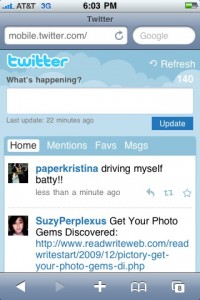